#89 Accommodation - focusing on objects far and near

The amount of focusing needed by the lens depends on the distance of the object being viewed – light from near objects requires a more convex lens than light from a distant objects. 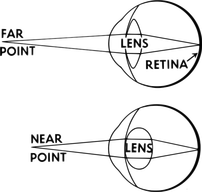 The shape of the lens needed to accommodate the image is controlled by the ciliary body - this contains a ring of muscle around the lens.

The ciliary muscles relax, giving them a larger diameter. This pulls on the suspensory ligaments which, in turn, pull on the lens. This makes the lens thinner (less convex). As the ciliary muscles are relaxed, there is no strain on the eye.

The ciliary muscles contract, giving them a smaller diameter. This removes the tenssion on the suspensory ligaments which , in turn, stop pulling on the lens. The lens becomes thicker (more convex). As the ciliary muscles are contracted, there is strain on the eye, which can cause a headache if a near object (book, microscope, computer screen etc. ) is viewed for too long. 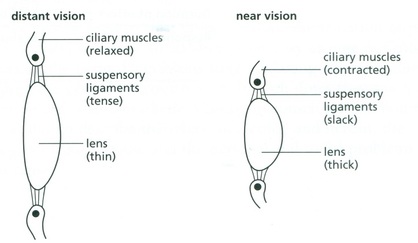 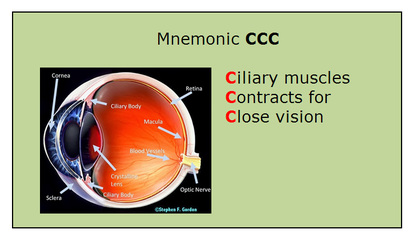 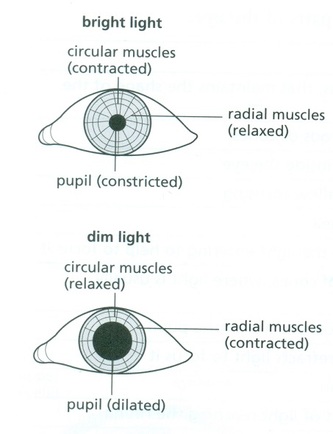 The retina detects the brightness of light entering the eye. An impulse passes to the brain along sensory neurones and travels back to the muscles of the iris along motor neurones, triggering a response - the change in size of the pupil due to contraction of radial or circular muscles.

Try this
Describe and explain how the eye changes its focus from a distant object to a near object.

- ciliary muscle contract
- the suspensory ligaments become relaxed
- so tension is removed from the lens
- the lens becomes more convex
- so light is focused more strongly.