Conservation is the process of looking after the natural environment. Conservation attempts to maintain or increase the range of different species living in an area, known as biodiversity. 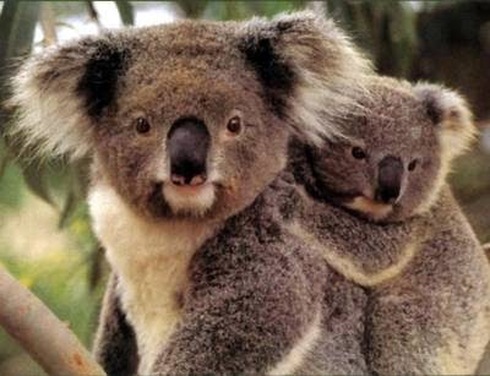 Koala is an endangered animal.
The need for conservation of species

- Many species of animals and plants are in danger of extinction, due to factors such as habitat destruction, the introduction of other species, international trade and pollution.

- Loss of a species also means that its genes are lost: these may be important in the future for genetic engineering (e.g. to improve crops) and the production of useful chemicals such as medicines.

- The presence of rare species can be an important source of money for poor communities, through tourism.

- The species may play an important role in a food chain: its loss could endanger other species.

The need for conservation of habitats

- If habitat is lost, so are the species that live in them, so habitat destruction poses the greatest threat to the survival of species.

- A habitat maybe conserved by:

The need for conservation of natural resources

Some natural resources (the material we take from Earth) are not replaceable (renewable). For example, fossil fuels such as coal took millions of years to form. Increasing demands for energy are depleting these resources.

- Grow tree specifically for fuel, then replant as they are cut down --> the greenhouse effect is not increased, and habitats can be maintained when trees felling is carefully managed.

The principle of recycling sewage (water) and paper

Sewage is mainly water, contaminated with organic material, solids, bacteria and minerals such as phosphates. In places where water is in short supply, the sewage is treated to provide water that is clean enough to drink. Any treated effluent that is returned to  water system such as a river will not cause problems such as eutrophication.

1. Large object such as sticks screened out of raw sewage.

2. Suspended grit allowed to settle out by gravity in grit settling tank.

3. Organic matter allowed to settle out by gravity in sludge-settling tank – after digestion in a sludge digester, sludge can be used as fertiliser on farmland – methane gas can also be generated for use as a fuel.

4. Remaining liquid sprinkled on to the top of an aeration tank containing stone – microorganisms (protoctists and aerobic bacteria) on surface of stones digest any remaining organic mater.

5. Water passing out may be chlorinated to kill any bacteria, so it is safe to drink. 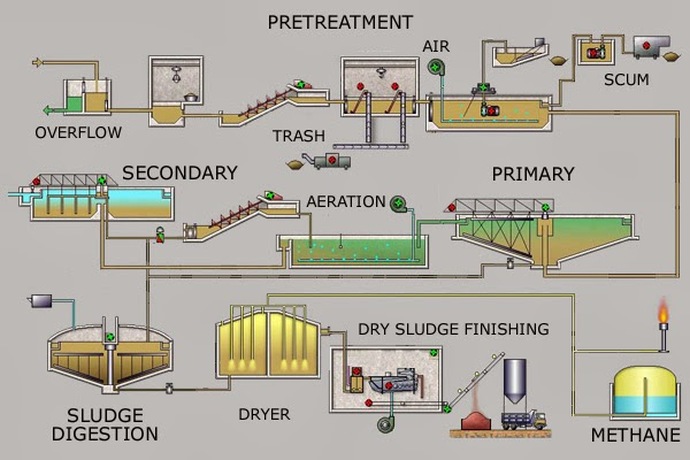 Typical large-scale sewage treatment plant. Credit:Wikipedia.
Paper is made from wood (trees). If the paper is recycled after use, fewer trees need to be cut down. The used paper is turned into a pulp and any dyes such as printing ink are removed. The pulp is then rolled into sheets and dried to produce recycled paper that can be used for newspapers, toilet paper, hand towels…
This post on blogspot.com