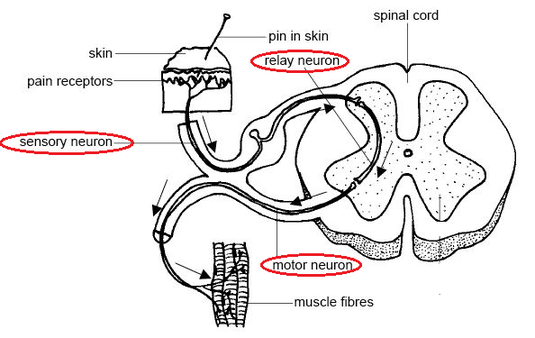 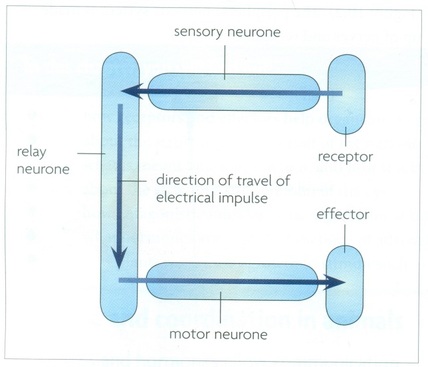 On the picture below, the stimulus is a drawing-pin sticking in the finger. The response is the withdrawal of the arm due to contraction of the biceps. 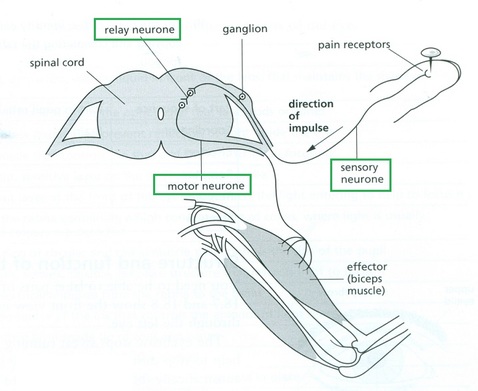 The sequence of events is:

Reflex: automatically and rapidly integrating and coordinating stimuli with responses

Neurones do not connect directly with each other: there is a gap called a synapse. The impulse is 'transmitted' across the synapse by means of a chemical called acetylcholine.

Figure below shows a nerve cell. 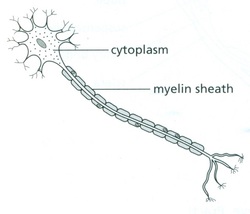 a. i) Name the type of nerve cell shown in the figure [1 mark]
ii) State two features that distinguish it from other types of nerve cell [2 mark]
iii) Where, in the nervous system, is this cell located? [1 mark]

b. Nerve cells are specialised cells. Suggest how the following parts of the nerve cell, labelled in the figure, enable the nerve cell to function successfully:
cytoplasm; myelin sheath. [4 mark]

c. Reflex involve a response to a stimulus.
i) Copy and completes the flowchart by putting the following terms in the boxes to show the correct sequence in a reflex. [2 marks]

ii) For the pupil reflex , identify each of the parts of the sequence by copying and completing the table below. The first has been done for you. [ 4 marks]

Answer
a. i) Motor neurone

ii) Two features from:
- presence of motor end plates
- the cell body is at the beginning of the cell
- the cell body has dendrites on
- there is no dendron (only on axon).

b. Cytoplasm: two suggestions from:
- is elongated
- passes electrical signals along
- connects different parts of the body
- is modified to form dendrites.