Effectors are muscles or glands which respond when they receive impulses from motor neurones. Examples of effectors are the biceps and triceps muscles in the arm. 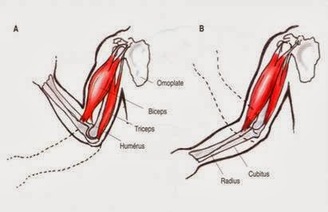 Structure of the human arm 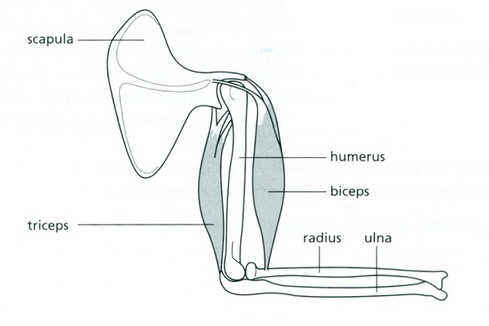 When stimulated, muscles contract get shorter). The biceps and triceps are antagonistic muscles - they have opposite effects when they contract.

The biceps is attached to the scapula (shoulder blade) and the radius. Contraction of the biceps pulls on the radius, moving the lower arm toward the scapula. This results in the arm bending (flexing) at the below - the arm is raised.

The triceps is attached to the scapula, humerus and ulna.

Figure below is a simplified diagram of the muscles and bones of the human leg.

a) Complete the following sentences.

Muscles are formed from cells which have special property of being able to ____ . Because of this, muscles can not push, they can only ___. [2 marks]

b) Muscles operate as antagonistic pairs. With reference to figure above, explain what is mean by this statement. [2 marks]

d) When running very quickly, the muscles of the leg may not receive sufficient oxygen to supply all their energy requirements.

i) Name the type of respiration these muscle cells carry out to release additional energy. [ 1 mark]

ii) Name the waste product produced by this process. [1 mark]

a) Contract; pull
b) Muscles A and B; and C and D are antagonistic pairs. They have opposite effects when they contract.
c) i) C
ii) B
d) i) Anaerobic respiration.
ii) Lactic acid (or lactate).
This post on blogspot.com