A food pyramid shows the relative sizes of different components at the various trophic levels of a food chain. There are three types of ecological pyramid we use: numbers, biomass and energy. 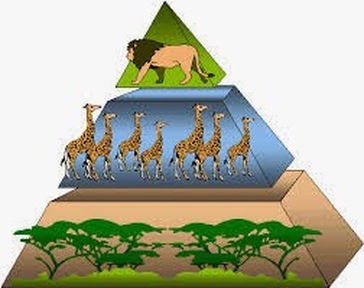 In a food pyramid, each trophic level in a food chain is represented by a horizontal bar, with the width of the bar representing the number of organisms, the amount of biomass or the amount of energy available at that level. The base of the pyramid represents the producer; the second level is the primary consumer; and so non.

A pyramid of numbers shows the relative number of organisms at each stage of a food chain.

Clover is a plant and it is the producer in this food chain. Its bar goes at the bottom of the pyramid:

Energy is lost to the surroundings as we go from one level to the next, so there are fewer organisms at each level in this food chain. A lot of clover is needed to support the snail population. A thrush eats lots of snails, and a hawk eats lots of thrushes, so the population of hawks is very small.

Sometimes the pyramid of numbers doesn't look like a pyramid at all. This could happen if the producer is a large plant such as a tree, or if one of the animals is very small. Remember, though, that whatever the situation, the producer still goes at the bottom of the pyramid.

An oak tree is very large so many insects can feed on it.
Example 3: Grass → Rabbit  →  Flea

Fleas are very small and lots of them can feed on a rabbit.
2. Pyramids of biomass

Sometimes a pyramid of numbers is not the best way to represent a food chain.

In this case a pyramid of biomass (the dry mass of an organism) is a better diagram to use. It shows the total mass of organisms at each stage of a food chain.

In general, all producers have a higher biomass than the primary consumer, so a pyramid will always be produced.

The total energy (and biomass) present at a lower tier of the pyramid, must be greater than the higher tiers in order to support the energy requirements of the subsequent organisms. 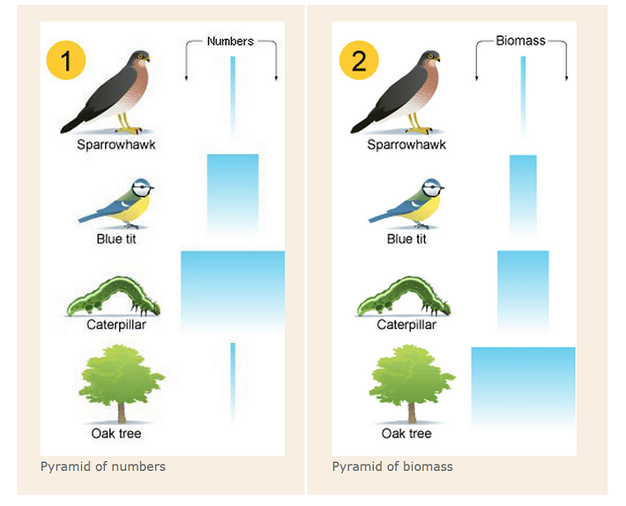 Pyramid of numbers and pyramid of biomass.
3. Pyramids of energy

Pyramid of energy shows amount of energy trapped per unit time and area at each stage of a food chain.

A normal-shaped pyramid is always produced because there is a reduced amount of energy at each successive level.