# 92 Formation of urea and breakdown of alcohol, drugs & hormones in liver

Surplus amino acids in the bloodstream cannot be stored. They are removed by the liver and broken down into the urea (which is the nitrogen-containing part of the amino acid) and a sugar residue, which can be respired to release energy. The breakdown of amino acids is called deamination. 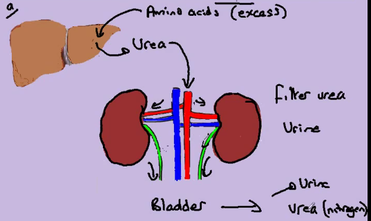 Photo credit: James X - Biology Blog
Urea is returned to the bloodstream (into the hepatic vein) and filtered out when it reaches the kidneys.

The body treats alcohol as a poison. The liver removes poisons, such as alcohol and drugs, from the blood and breaks them down. Prolonged and excessive use of alcohol damages the liver and may cause it to fail. An overdose of drugs, such as paracetamol, can result in death due to liver failure, because the liver cannot cope with breaking down such a high concentration of the chemical.

The liver also converts hormones into inactive compounds. These are filterd out of the blood by the kidneys.
This post on blogspot.com