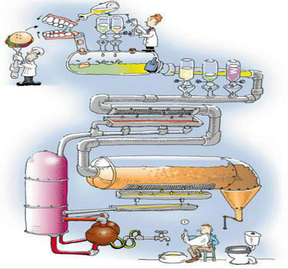 Mechanical digestion, performed bye the teeth à pieces of food are mixed with saliva and become smaller à easier to swallow and have a larger surface area.
Peristalsis

Misconceptions: Chewing food does not involve breaking down large molecules into small molecules; it only breaks down large pieces into smaller pieces, giving a larger surface area for enzymes to work on.