#101 Sickle cell anaemia and its incidence to that of malaria

Sickle cell anaemia is caused by a mutation in the blood pigment haemoglobin. When the faulty haemoglobin is present in a red blood cell, it causes the cell to deform and become sickle-shaped, especially when oxygen levels in the blood become low. 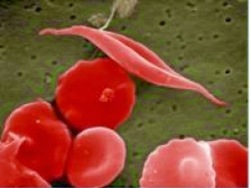 The faulty allele is dominated by the allele for normal haemoglobin, but still has some effect in a heterozygous genotype.

The possible genotypes are:

Malaria is a life-threatening disease caused by a parasite that invades red blood cells. The parasite is carried by some species of mosquito.
When the distributions of malaria and sickle cell anaemia are shown on a map of the work, it is found that the two coincide in tropical areas because of the selective advantage of the Hn allele in providing protection against malaria.