#150  Effects of tobacco smoke on the respiratory system 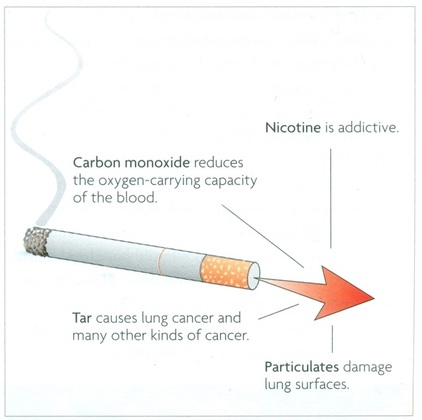 Some of the substances in tobacco smoke.
Carbon monoxide:

- combines with haemoglobin in RBC ---> prevents them transporting O­2­.

- a carcinogen: increase risk of lung cancer ( cell division out of control)

Remember that only nicotine and carbon monoxide enter the blood. Tar and smoke particles do not – they stay in the lungs.

The table shows the percentage of haemoglobin which is inactivated by CO present in the blood of taxi drivers in a city.

Studen’s answer
i) 1. cigarette smoke V
2. breathing by passengers X
ii) It must be cigarette smoking because non-smokers have less of their Hb affected. V
iii)Therer could be less car exhaust fumes, containing CO, at night. V

In part (i), the second answer if biologically incorrect (we breath out CO2, not CO. The other correct answer was car exhaust gases.
In part (ii), the answer and the explanation were correct.
Part (iii) war a good answer.