#27 Use of microorganisms to manufacture antibiotic penicillin

Antibiotics are substances which kill bacteria without harming human cells. They help to cure bacterial infections. Penicillin is made by growing the fungus Penicillium in a large fermenter. 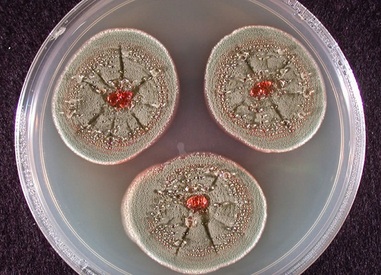 Three colonies of a Penicillium mold growing on an agar medium.
Often, it is easier to use the whole microorganisms rather than extract its enzymes from it. The microorganism is grown in a fermenter, its enzymes convert a substrate to a desired product. The production of antibiotic penicillin is one example. 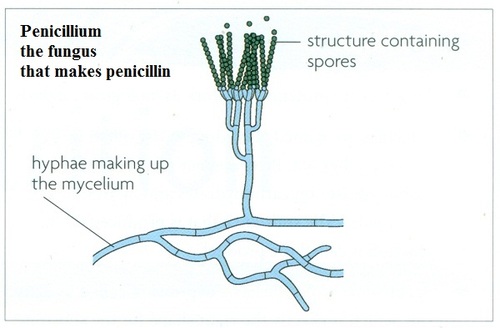 The fungus is grown in a culture medium containing carbohydrates and amino acid. This looks like watery porridge and is stirred continuously to: 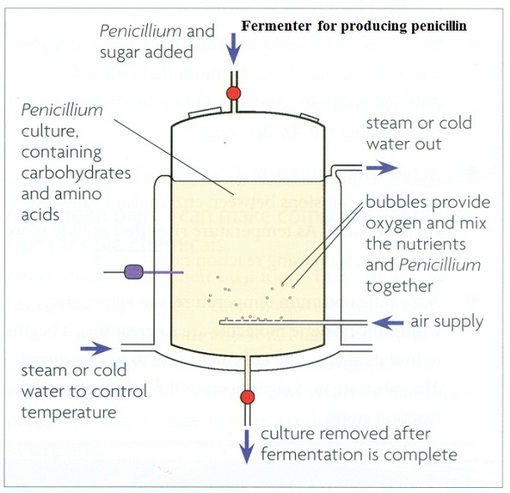 For first 15-24 h, the fungus just grows. After that it begins to secret penicillin. Rate of production depends on how much sugar is available:
So small amount of sugar have to be fed all the time that the fungus is producing penicillin.

The culture is kept going until the rate of production is so slow that is not worth waiting more (often after a week). Then it is filtered, and the liquid is treated to concentrate the penicillin in it.

History (not included in the syllabus)

Thousands of glass fermentation vessels like this one were used in Glaxo (now GlaxoSmithKline) laboratories to produce penicillin. 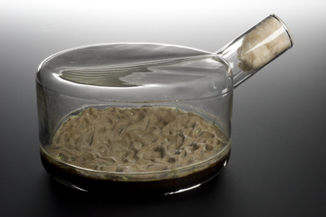 The penicillium mould was grown on the surface of a liquid filled with all the nutrients it needed. This approach was replaced by the method of growing the mould within large industrial fermenters. The antibiotic was first used in the early 1940s and saved the lives of many soldiers during the Second World War. 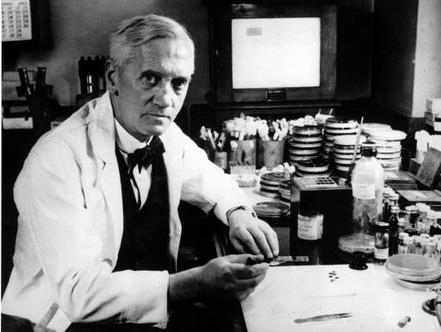 Sir Alexander Fleming, 1952 (photo AP)
Penicillin was discovered by chance.  Alexander Fleming - the Scottish bacteriologist - accidentally left a dish of staphylococcus bacteria uncovered for a few days. He returned to find the dish dotted with bacterial growth, apart from one area where a patch of mould (Penicillin notatum) was growing. The mould produced a substance, named penicillin by Fleming, which inhibited bacterial growth and was later found to be effective against a wide range of harmful bacteria.

However, it was not until World War II that penicillin, the first antibiotic, was finally isolated by Howard Florey and Ernst Chain. Fleming, Florey and Chain received a Nobel prize in 1945, for their discovery which revolutionised medicine and led to the development of lifesaving antibiotics.