Mitosis is a nuclear division giving rise to genetically identical cells in which the chromosome number is maintained by the exact duplication of chromosome.

Meiosis is a reduction division in which the chromosome number is halved from diploid to haploid. 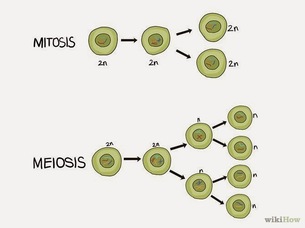 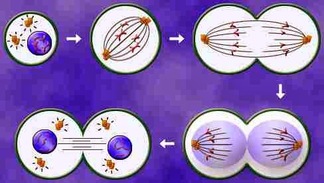 Mitosis is the way in which any cell (plant or animal) divides when an organism is:
Growth means getting bigger. An individual cell can grow a certain amount, but not indefinitely. Once a cell gets to a certain size, it becomes difficult for all parts of the cell to obtain oxygen and nutrients by division. In order to grow any more, the cell divides to form two smaller cells, each of which can then grow and divide again. 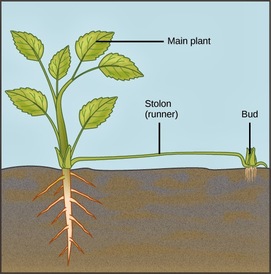 Meiosis is the way in which gametes (sex cells) are produced.  Gametes have only half the number of chromosome of a normal body cell. They have 1 set of chromosome instead of 2. When they fuse together, the zygote formed has 2 sets. 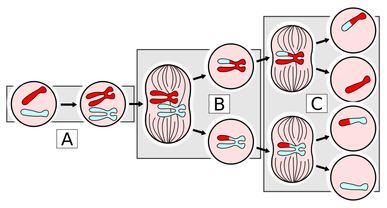 The transfer of inherited characteristics to new cells and new individuals depends on two types of cell division. During ___________, the chromosomes are duplicated exactly and _________ cells are produced.

During meiotosis X , the chromosomes are duplicated exactly and identical X cells are produced.

However, during meiosis V, the chromosome sets are first duplicated and then halved, producing cells. These cells will become gametes. V

The first answer is not clear – it mixes up the terms ‘mitosis’ and ‘meiosis’. Sometimes candidates do this deliberately when they are not sure of the answer, hoping that the examiner will give them the benefit of the doubt. (We don’t!). This candidate has not followed the rubric (instructions) in the question for the second answer: the term ‘identical’ does not appear in the word list. The correct answers are ‘mitosis’ and ‘diploid’.

1) The nuclei of human liver cells contain 46 chromosomes. Complete the table below to show how many chromosomes would be present in the cells listed. [3 marks]

2) Describe 2 differences, other than the number of chromosomes, between nuclei produced by mitosis and those produced by meiosis. [2 marks].

Video: Difference between mitosis and meiosis
This post on blogspot.com