# 97 Monohybrid cross and the punnett square

A monohybrid cross involves the crossing of individuals and the examination of one (mono) character (flower colour, pod shape...) and different (hybrid) traits (red colour, white colour) in their offspring.

The Punnett square is a useful tool for predicting the genotypes and phenotypes of offspring in a genetic cross involving Mendelian traits. 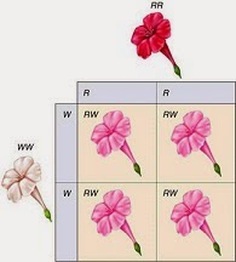 The F1 seeds were all purple; the white flower trait failed to appear at all.

The F1 plants were allowed to self-pollinate. This step was the monohybrid cross. (or the F1 cross). The progeny, called F2, were examined: roughly 1/4 were white, and 3/4 were purple.

All the genetic crosses shown below will involve examples using pea plants, which can be tall (T) of dwarf (t) – tall is dominant to dwarf. 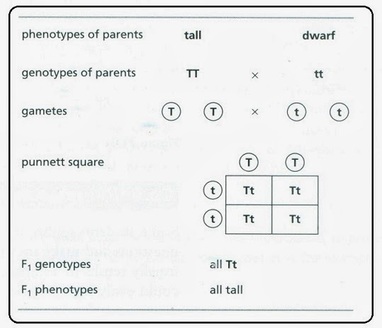 2. A cross between two heterozygous tall pea plant.
The genotype of both plants must be Tt. 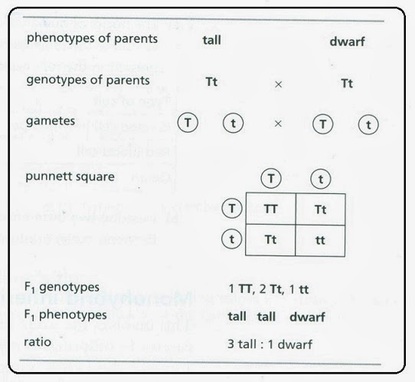 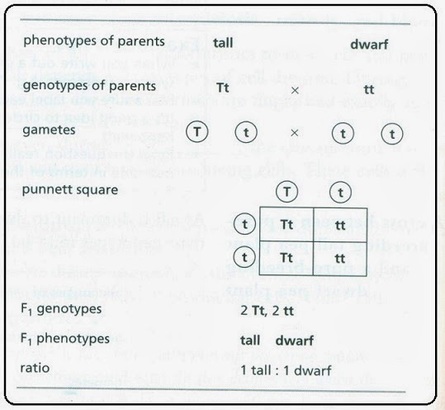 Some students ignore the letters for alleles given in genetic questions and make up their own,  without stating a key. This usually results in a number of marks being lost through errors that could easily have been avoided.

2. Complete the passage by writing the most appropriate word from the list in each space.
chromosome   diploid  gene   heterozygous  meiosis  mutation  phenotype  recessive    dominant

Petal colour in pea plants is controlled by a single ___which has two forms, red and white. The pollen grains are produced by _____. After pollination, fertilization occurs and the gametes join to form a ____ zygote.